The Osage Nation has a long and proud history of military service. The Nation had long desired to build a memorial to their veterans and, in 2011, the Osage Nation War Memorial Commission was established, charged with the oversight and control of the development of an Osage Veterans Memorial.

In 2016, Wallace Design Collective was selected by the War Memorial Commission to provide the design for the new memorial. The War Memorial Commission wished to honor all Osage veterans – living and deceased, those who saw combat and those who did not, alike – so as the design process progressed, the space changed from strictly a war memorial to a space to thank and remember all Osage warriors.

The Osage Nation Veterans Memorial is conceived as a place of healing, community and remembrance of those who have served. Water is used throughout the memorial to represent life. The north side of the memorial consists of a curved water wall, constructed of rough and smooth black granite blocks. The water cascading down the wall provides a healing sound, giving both comfort and privacy for introspection. In the center of the wall, the waterfall is broken with a smooth granite panel bearing the memorials dedication. Lining the upper lever of the wall are ten flagpoles flying the flags of the United States, POW-MIAs, Osage Nation, State of Oklahoma, Army, Navy, Marines, Air Force, Coast Guard and the 45th Infantry Division.

The center of the memorial is organized around the five branches of the military. Black granite monuments representing each branch are arranged to form a large star and are engraved with the names of Osage veterans in each branch. The inside face of each bears the crest of the branch it represents. Integrated with the star is a large dais, a series of raised platforms used to commemorate the conflicts in which the Osage have served. The faces of the steps are engraved with the name of each conflict.

The focal point of the Veterans Memorial lies at the center of the star. There, a large circular granite base has water flowing across its top surface and falling down its sides, again invoking the concept of life. Rising out of the base is a single 20-foot tall stainless steel feather, representing Osage warriors past and present.

The plaza surrounding the memorial contains pavers which were purchased to honor or remember a loved one. The funds raised by the sale of the pavers went towards the maintenance of the memorial. In addition, there are two gazebos just outside the plaza, designed to integrate with the future Osage interpretive trail. There is also a large gazebo to provide cover during ceremonies as well as additional parking. The memorial was dedicated on Veterans Day in 2018. 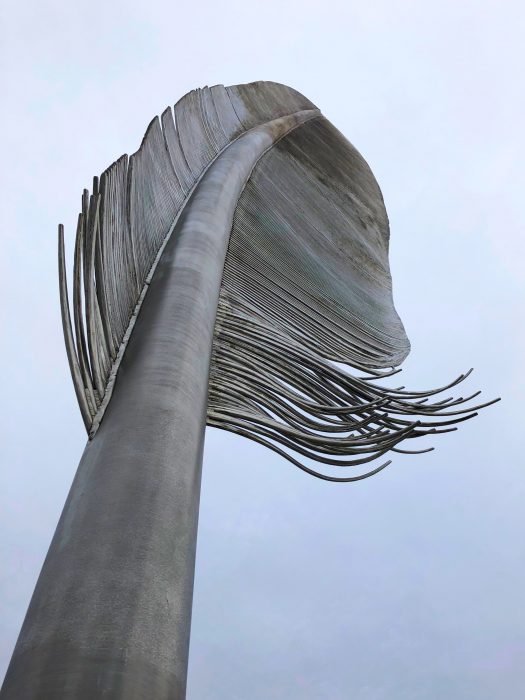 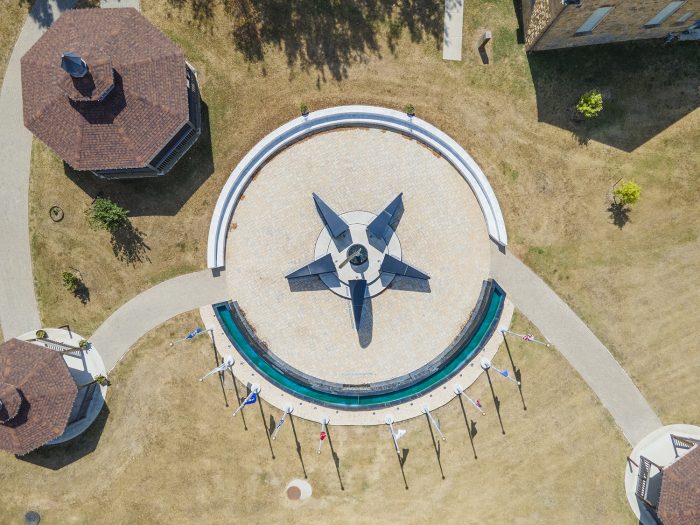 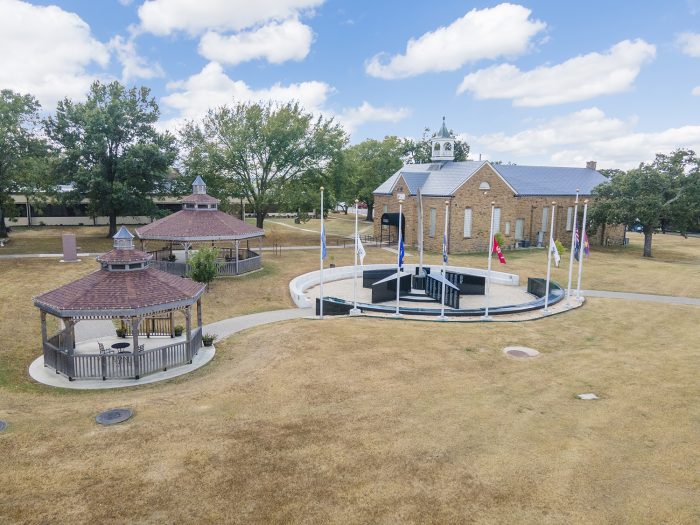 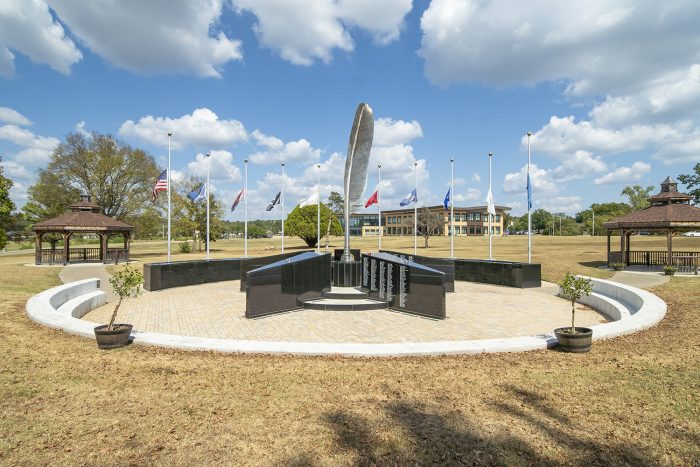 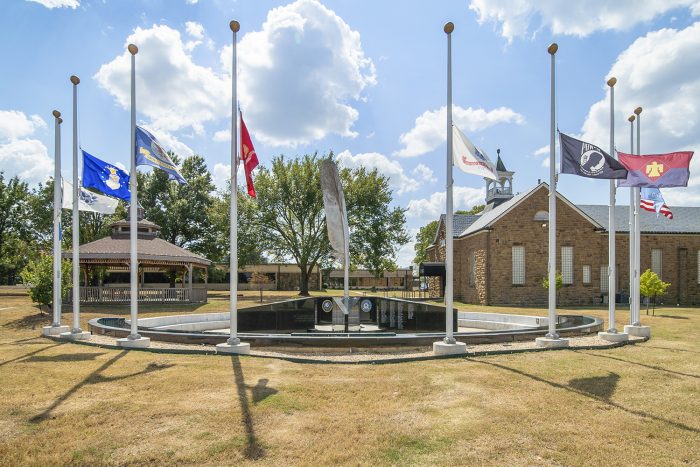 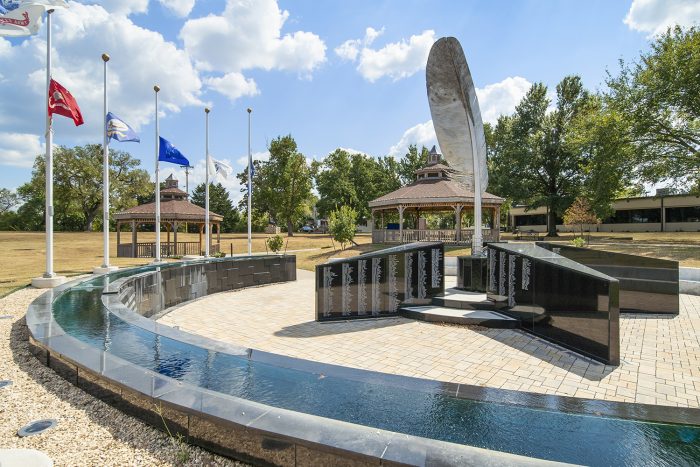 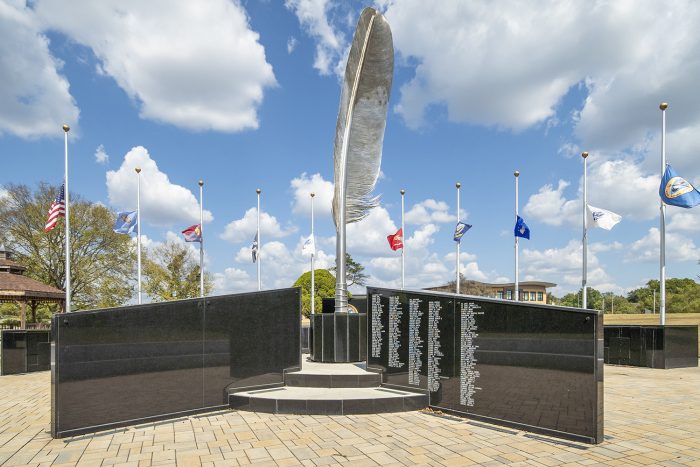 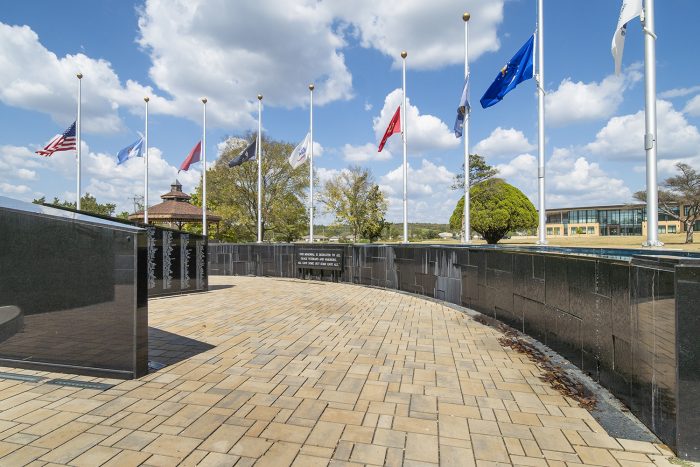