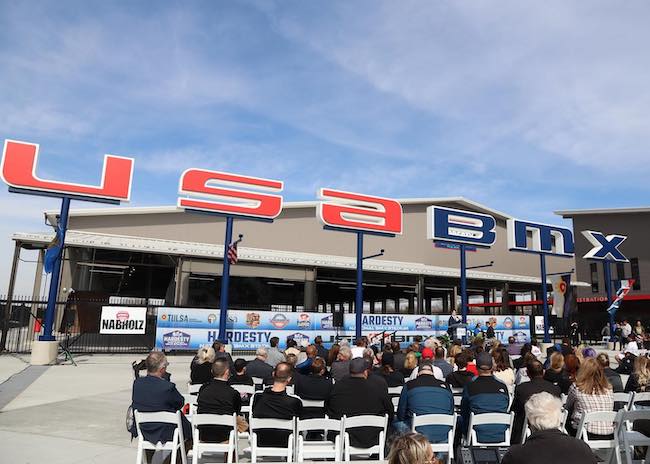 That's right, as of February 15, 2022, the city that's known for hosting the BMX Grand Nationals every year in November is now officially home to the USA BMX Headquarters, Hall of Fame, and premier Hardesty National BMX Stadium.

Like the rest of the city, USA BMX President Shane Fernandez is stoked.

"On the racing side, this is going to be a state-of-the-art facility ‒ best track in the country," says Fernandez, citing the cutting-edge shotcrete banked turns and aggressive "European style" jumps.

"The other side of it with the BMX Foundation ‒ our programs have reached a quarter of a million students nationwide and we're the only Olympic program that combines STEM/STEAM and fitness. I'm excited for what it's going to be for the community."

USA BMX reaches far beyond racing. The USA BMX Foundation invests in today’s youth through educational BMX programs. With the Foundation now based at the Tulsa headquarters, this new facility will be more than just a racing and training track for the US Olympic and National Teams and elite teams from around the world ‒ it will be a youth community outreach center. Fernandez says the facility will be open six days a week for field trips, after-school programs, leagues, one-on-one coaching, and BMX STEM camps, which are starting this spring break.

In addition to their standard BMX STEM, Read to Ride, and Track Modeling programs, Fernandez is especially looking forward to kicking off a new diversity and inclusion program targeting the local Greenwood community.

"The one that we are extremely passionate about is a new program called RISE, which stands for Resilience, Inclusion, Social Awareness, and Education," explains Fernandez. "It is our effort in partnership with the Terence Crutcher Foundation in North Tulsa and Greenwood to really address an underserved community with mentorship opportunities and training."

USA BMX has it all - racing, STEM, and outreach. They’re looking to bring their energy to all corners of the country through their new architecture/engineering/construction (AEC) management branch, ABA Ethos. And there’s no better person to lead all of this than Fernandez. His passion for BMX and outreach combined with the strong AEC background he gained before becoming the USA BMX President makes him the ideal champion for the STEM programs and the organization’s drive to create a national footprint.

In honor of USA BMX’s STEM and AEC connections, we thought it would be fun to dive into some of the unique engineering and construction challenges associated with this new headquarters and stadium. Take a look!

The open arena structure consists of a series of steel gabled moment frames spanning 272 feet across the width of the arena ‒ almost the length of a football field. As Wallace Principal Brian Walker, PE, SE notes, with long span metal building frames of this type, gravity loads (i.e. the frame self-weight and any load applied to the roof) create a lateral “thrust force” at the frame bases. (Imagine pushing down on the roof peak and the vertical legs wanting to kick out - that’s thrust!)

“Usually the thrust that is developed at the base of the 272 feet clear span arena building frames would be resisted by tie beams cast beneath or monolithically within a slab on grade,” explains Walker.

But in the case of the BMX arena…there’s no slab on grade, and the base of the recessed dirt track “is well below the base of the frames,” meaning traditional reinforced concrete tie beams were not an option.

According to Walker, the final design relies on massive 16-foot long x 12-foot wide x 5 foot deep footings at the bases of each frame. The footings resist a whopping 140,000 lbs of thrust through a combination of sliding resistance (friction) and passive pressure (soil pushing on the outside of the footing). To put the footing size in perspective, were it not for the super-sized thrust force, foundations could have been designed as much smaller 8-foot x 8-foot footings.

A lot of foresight and background coordination went into turning this old industrial site into a state-of-the-art BMX arena and headquarters. During the site development process, Wallace Design Collective juggled a lot of aspects that aren’t obvious but were vitally important to the success of the project.

According to civil project manager and Wallace Principal Jordan Rodich, PE, CFM, one of the unique aspects of the site is the optical illusion created by the grading. The track is recessed 8 feet below the plaza level, making it appear that the entire track area was excavated out. In reality, to avoid digging down into rock, the track elevation sits close to the site’s existing elevation, while everything else was built up around it.

When it came to site layout, utilities, and mapping, Rodich’s team had to balance the BMX facility’s needs with how the designs and actions would impact a future development to the south and an existing adjacent railway. As part of the process, the engineers were careful to reroute a sanitary line and create an emergency access easement so these features would be available to future developers. The project also incorporated a new storm line for managing runoff ‒ a feat that involved nearly a year of negotiation between the City of Tulsa and the railway. Additionally, the civil team surveyed the entire BMX site plus the proposed development and updated the legal plat of the properties. This included the extra coordination required to clean up entitlements and remove old railway spur easements.

“A lot of that stuff, when looking at entitlements for property, replating, rezoning, anything like that, that’s really a huge part of our day to day, and a lot of times, that’s what takes a significant amount of time,” notes Rodich.

But for Rodich and his team, the behind-the-scenes work is par for the course.

“I think honestly, with most engineering, it’s one of those things where if you do your job, it all goes unnoticed and functions like it should.”

It’s not every day that a contractor gets to work on a new BMX arena, and Senior Project Manager Ryan O’Neil and his team at Nabholz Construction are thrilled to have played a part.

One of the unique aspects the crew had to coordinate early on was an archeological review of the site. The new BMX facility is located in the historic Greenwood District just north of downtown Tulsa. Archeologists were called in to determine if the site contained any historical artifacts or insights tied to the 1921 Race Massacre. Although nothing was discovered, the process was a sobering reminder of the location’s significance.

Overall, O’Neil says most of Nabholz’s challenges revolved around the arena construction.

“The actual structure for the arena itself and the size of it - we were right up against the limits of a freespanned structure that we could erect out there. And in doing that, with the actual footprint being a recessed track, we had lots of planning and obstacles to overcome with erecting a building that’s essentially sitting in a hole.”

Some of those obstacles included the construction of 1,200 feet of retaining wall and the logistical challenge of bringing all of the equipment and materials in and out of a single access point. Additionally, there was a BMX learning curve and a lot of coordination with specialized subcontractors, like track builders and starting gate system installers.

As exciting and satisfying as it was to be part of this challenging project, O’Neil is most excited for what this world class BMX facility and programs mean for Tulsa’s youth and community moving forward - the unique opportunity for local kids to come ride and build a passion for BMX.

“To me, it means that kids that don’t have a lot of opportunities elsewhere are going to have something they can build on and hold onto,” says O’Neil. “We’re all out here swinging hammers and moving dirt, but there’s a bigger picture on the back end.”