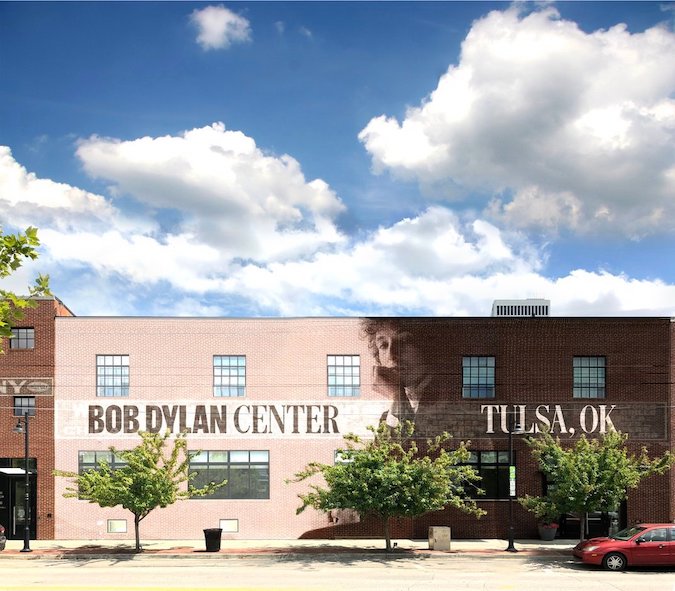 Why is the Bob Dylan Center in Tulsa? It’s Really the Only Logical Choice.

When you hear “Bob Dylan,” what words come to mind?

Up until recently, Tulsa would likely have never been included on that list. But with the opening of the Bob Dylan Center on May 10, 2022, Tulsa is officially assuming the role of preserving Bob Dylan’s iconic, unique, and timeless legacy.

Dylan himself has provided only a limited, vague explanation as to why he feels comfortable cementing his legacy in this humble flyover state where he has no hard ties. Knowing that his legendary archives would have a final resting place just down the street from those of his idol Woody Guthrie most certainly played a role. But…is that all?

Maybe. Or maybe it’s Bob once again masterfully speaking to the everyman, knowing what we want – even need – to feel before we even know it ourselves.

Dylan’s easy croonings and poetic musings speak to us all. It doesn’t matter if you’re rock or folk, young or old, red or blue. He has somehow written to every one of us, generation upon generation. Contemplating “how many times must the cannonballs fly” resonates as powerfully today as it did in 1960. Rolling stone millennials from all walks of life, feeling on their own with no direction home, are pushing through, finding themselves, just as their baby-boomer parents did decades earlier. His lyrics are universal. Unifying.

Think about it: it wouldn’t have been right to allow Dylan’s legend to be drowned out in the loud, commercial fringes of LA or New York. It makes sense that Dylan’s immortality be rooted in the peaceful plains where his work will stand tall and stand out. Thriving in the literal heart of the country where his branches can stretch out over every corner of the nation, drawing us in. In an age of such divisiveness, acting as a central, unifying totem. Reminding us of how similar we are at our core.

Regardless of his true motivations, you might be surprised to find out that the Bob Dylan Center is simply a natural fit for Tulsa. The city’s secret identity as a music and pop culture hotspot is slowly getting out. Blues, country, gospel, folk, jazz, and rock meld together in Tulsa, bringing a melting pot of American music enthusiasts to this laidback city in the heart of the country.

You know that at Wallace Design Collective, we’re all about buildings and structures. In recent years, we’ve been fortunate to collaborate with our local friends at Lilly Architects, designing a new museum and renovating historic structures that capture the essence of Tulsa’s rich musical background.

So we’re here to convince you why Bob Dylan in Oklahoma makes perfect sense. Here are four other venues that are turning an unassuming city into musical mecca, proving why the Bob Dylan Center truly belongs in Tulsa, Oklahoma:

Folk music legend Woody Guthrie hails from Okemah, Oklahoma, and the Woody Guthrie Center, a museum dedicated to his legacy, resides in an old paper warehouse just north of downtown in the heart of the Tulsa Arts DIstrict. His honest, original folk songs brought to light social and political issues, such as the plight of the Dust Bowl migrants, as well as the physical and intangible beauty of America, as captured in his most famous song, “This Land is Your Land.” From a mural on the side of the building, Guthrie, with his iconic “this machine kills fascists” guitar, appears to peer across the street to his namesake park, Guthrie Green, soaking in the energy, satisfied that his legacy has made a difference.

It’s no secret that Woody Guthrie was a major influence on Bob Dylan. Dylan credits Guthrie for inspiring him to stray from tired folk songs and write and sing his own music that captured what he felt and saw. Dylan actually ended up meeting his idol and forming a deep bond. While Guthrie spent his final years suffering from Huntington’s disease in a New York hospital, Dylan would visit him and humbly play Guthrie’s requests, which were often his own folk songs.

Ever heard of Leon Russell? You’d be hard pressed to find a musician from the ‘60s and ‘70s that wasn’t connected in some way to this Rock and Roll Hall of Fame, Grammy-winning musician known for spanning practically every music genre. After growing up in Tulsa, Russell made a name for himself in LA as a session musician, playing piano, bass, and more for live shows and studio albums for artists including the Byrds and Gary Lewis & the Playboys. He also became well-known as a songwriter and producer, eventually co-founding Shelter Records.

In 1972, he returned to Tulsa and opened his own recording studio in an abandoned stone church just east of downtown. Russell not only recorded his own work there, but throughout the early-mid ‘70s, the Church Studio was a hot destination for a number of famous artists eager to work with Russell. Jimmy Buffet, Eric Clapton, Stevie Wonder, and Willie Nelson are just a few of the artists who at one point came through Tulsa to record with Russell at his iconic studio.

And you guessed it: Russell and Dylan have certainly crossed paths. Most famously, in 1971 when Dylan was chasing a new sound, he collaborated with Russell, and the two wrote and recorded the bluesy “Watching the River Flow,” featuring Dylan’s soulful vocals, twangy electric guitar, and Russell passionately pounding away on the ivories.

Back in the Tulsa Arts District, just down the block and around the corner from the Bob Dylan Center and Woody Guthrie Center you’ll find the “grit and glitz” of OKPOP. This brand new museum is devoted to highlighting the downhome work ethic and Hollywood glam of Oklahoma pop culture icons in music, TV, literature, film, comics, and theater.

When it comes to music, there’s no shortage of Oklahoma artists who have impacted the industry. In addition to Woody Guthrie and Leon Russell, you’ve got Bob Wills, Garth Brooks, Toby Keith, Kristin Chenoweth, Vince Gill, and The Flaming Lips, to name a few. The OKPOP website declares the museum is located at the “crossroads of creativity” – just off of Route 66 and directly across the street from another famous piece of music history, Cain’s Ballroom.

If you’re searching for iconic music venues, look no further than historic Cain’s Ballroom. Cain’s put Tulsa on the map and is arguably the city’s most important piece of music history. The site was home to Bob Wills and the Texas Playboys. From 1935-1942, Bob Wills and his band broadcast their unique blend of blues, jazz, and country from Cain’s, building the foundations for rock and roll years later. Now, a cozy concert hall, bands play to standing-room only crowds. Cain’s has seen the likes of performers from the Sex PIstols to Smashing Pumpkins to – ironically (or not?) – Bob Dylan.

There you have it, touchstones of Tulsa’s rich music history. But if you’re still somehow not convinced, maybe it’s time to come take a look and see for yourself…because when it comes to recognizing influential cultural epicenters of American music, it’s time to start looking beyond the obvious. The times, as they say, they are a-changin.

Interested in learning how architects and engineers play a role in museum design? In an upcoming post, we’ll highlight behind-the-scenes contributions of Olson Kundig, Lilly Architects, and Wallace Design Collective in the creation of the Bob Dylan Center. Stay tuned!