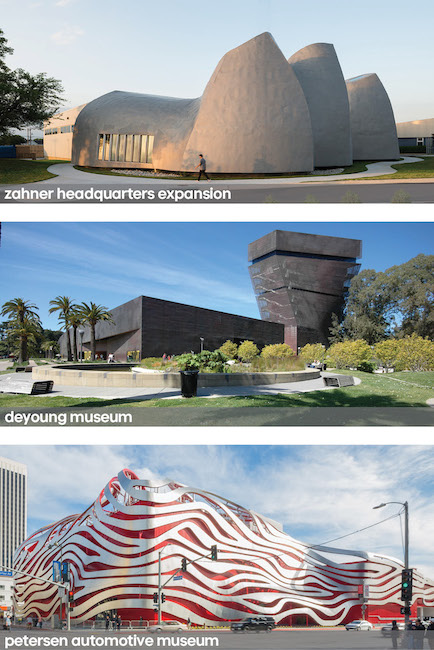 Zahner and Wallace: A Glimpse Into the Artful Engineering Collaboration Behind Iconic Metal Facades

When Steve Huey, PE, was 12 years old, he went on a life-changing family trip – one that set the course for his future. While staring up at sleek silver spires slicing through the Colorado sky, Huey knew right then and there what he wanted to do when he grew up: be involved in the design and construction of awe-inspiring, architectural masterpieces like the US Air Force Academy Cadet Chapel standing before him.

Still, it took a while for him to discover exactly what “that” career would be. His interests led him to architectural engineering and the beginnings of a standard structural engineering career – which were satisfying, but something was missing. About a decade into his career, Huey found himself working with Zahner, an architectural metalwork manufacturer headquartered in Kansas City. Through Zahner, he finally discovered the tangible niche defining that elusive, alluring line of work he had been chasing: metal facade engineering.

For 120 years, Zahner has been a force in the metal fabrication industry, with a resume spanning from gutters to artwork. Today, Zahner is world-renowned in architecture circles, having worked extensively with Frank Gehry and providing iconic metal facades for eye-catching architectural jewels, such as Millenium Park’s Pritzker Pavilion bandshell in Chicago and MoPOP in Seattle. But when it comes to aesthetically stunning facades, the beauty is more than just skin-deep. These facades are actually intricate engineering marvels.

Aluminum and Copper and Bronze, Oh My!

Huey and Denton agree that one of the most unique aspects of engineering metal facades is designing specialized members and connections with various metals and other materials not typically seen in structural applications. Most structural engineers rely on standard calcs or readily-available tables to select hot-rolled or cold-formed steel members with well-understood material and section properties and well-researched code provisions. Conversely, metal facade engineers are often designing thin plates or one-off connections using everything from stainless steel and a range of aluminum alloys to copper, bronze and plexiglass. With a limited body of research and design guides, there’s no falling back on standard tables or provisions.

Facade design brings with it a host of special considerations:

On the surface, metal facades might seem like “unconventional” structural engineering. But if anything, these facades may actually be the epitome of orthodox, back-to-basics design. Engineering boils down to fundamental structural mechanics principles, like stress-strain curves and load-deflection charts, with a few fun geometries, loads, and boundary conditions mixed in.

Facades are unique and basic, all at the same time. And for Denton, it’s this detail-oriented combination of novelty and fundamentals that is the most satisfying part.

“I’ve always liked the things that are weird and more interesting. I really like days when I sit down and kind of work my way through some geometry and figure out stresses, that kind of thing, as opposed to doing more large-scale work, where I’m trying to crank out a whole warehouse roof or something. I’ve done both, but I really liked the little bits and parts, and there’s a lot of little bits and parts in facade work.”

Going Where No Engineer Has Gone

To say that this field is unique is an understatement. In addition to performing specialized analyses, Wallace and Zahner sometimes even end up having to develop their own reference data. Their workflow routinely involves proving calculations and design assumptions through full-scale testing – something relatively rare for structural engineers in the private sector.

Whether verifying a shear wall or connection or compiling data to support code provisions, it’s safe to say that facades can take structural engineers to where no building engineer has ever been before. Check out some of the unprecedented design challenges that Wallace and Zahner have tackled:

Zahner Headquarters Expansion – It’s only fitting that Zahner’s headquarters reflect their innovative spirit. When it came to sizing the unconventional aluminum shear walls for the new abstract, zinc-clad pods, Wallace pulled what existing research they could for steel panel shear walls while also completing their own testing. At Zahner’s research facility, the team used a winch to apply load to the top of a full-scale prototype while measuring deflection and watching for failure. The empirical data confirmed design calculations and has also served as a reference for more aluminum shear wall designs.

de Young Museum – Cost and schedule changes meant that stainless steel structural members supporting the perforated copper facade had to be redesigned as copper cold-formed joists and extruded bronze girts. Since no structural design code for copper or bronze exists, Wallace had to develop their own code provisions to submit with their calculations to the City of San Francisco for approval.

Petersen Automotive Museum – Designing supports for the stainless steel and aluminum ribbons that wind around the museum was an engineering challenge for the ages. Connections had to resist rotation and limit deflection but also allow for movements due to temperature changes, high seismic forces, and differential deflections between supports located on the ground, the building, and a parking deck. The result was a series of individualized moment connections that are possibly unlike any in the world.

Wallace and Zahner’s facade collaborations don’t look to be slowing down any time soon. In fact, they have several projects in production right now – one of them is of special interest to Huey. Fifty years after his eye-opening encounter with metal facades, Huey is a member of the design team dedicated to engineering the new and improved metal spires set to once again adorn the US Air Force Academy Cadet Chapel.