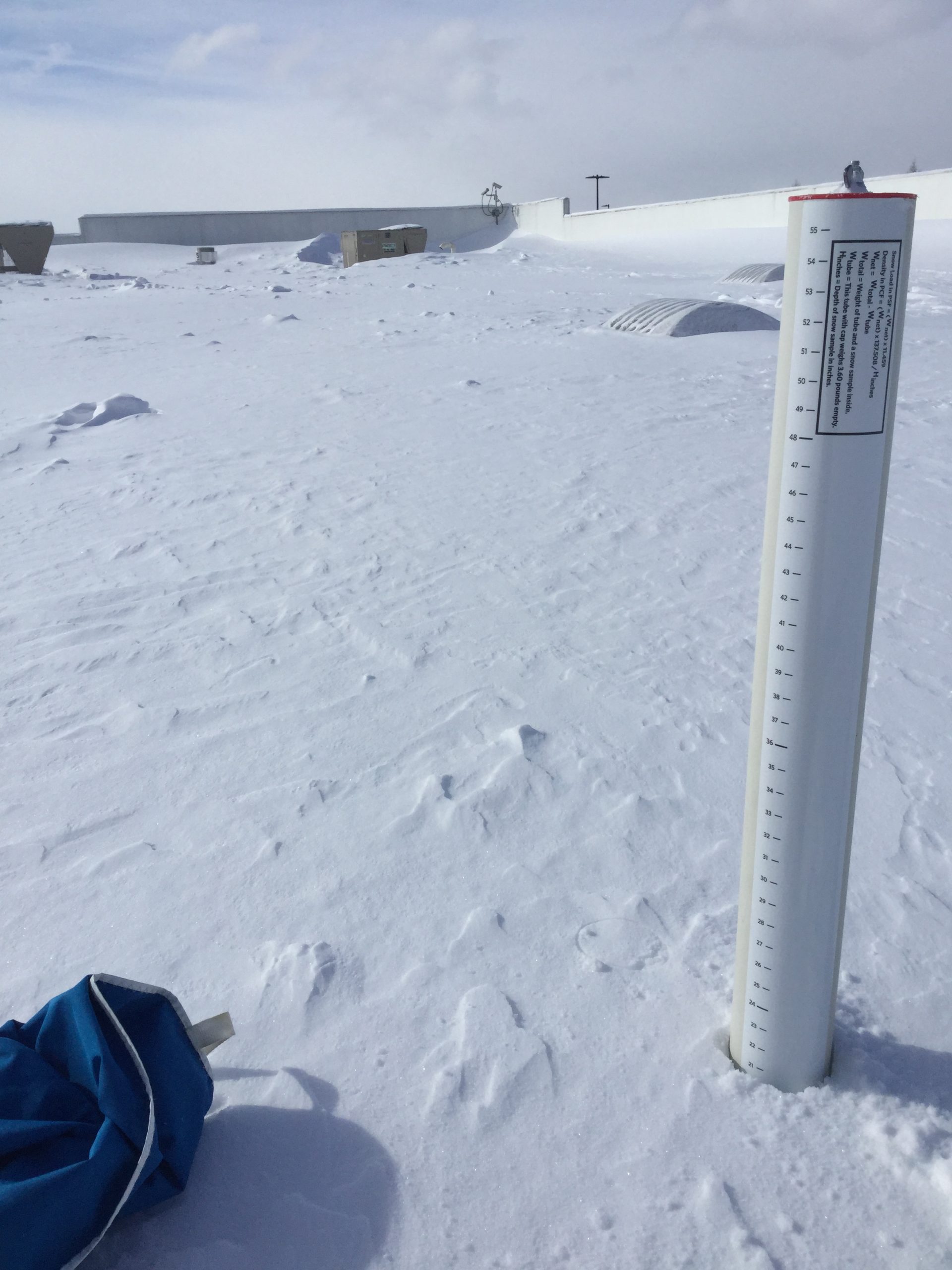 How to Calcuate Snow Weight from Depth and Density

Last week, the Northeast got another heavy dose of snow when a winter storm dropped more than 17 inches in Central Park and upwards of 24 inches in parts of New Jersey.

Ever wondered how many inches of snow a roof can handle before it gets overloaded?

Weather reports and news stories usually report snow in inches, but structural engineers are more interested in the weight of that fallen snow.

Building codes specify snow loads in terms of pounds per square foot (psf). Psf can sometimes be hard for me to wrap my head around, so I like to think of it in terms of free weights on floor tiles. Imagine you’re at the gym and someone tells you to apply 10 psf to the floor. A standard vinyl floor tile is 1 square foot (12″x12″), so you would take a 10 lb weight and set it on one floor tile, then you would take another 10 lb weight and set it on the next tile, and keep doing so until each floor tile had a 10 lb weight. Ta- da! 10 pounds per square foot.

Back to snow. In modern building codes, the design load varies depending on location. Per the 2018 International Building Code, structures in the northern United States, such as areas of Minnesota, the Upper Peninsula of Michigan, and Maine, have to be designed for as much as 60 to 100 psf, and some areas at higher elevations even more – that’s some heavy dumbbells on your floor tiles! Conversely, structures in Florida or along the Gulf Coast don’t have to be designed for any snow.

Great, so now you know modern buildings have been designed with snow in mind, but how do you know when the actual snow from a blizzard weighs more than what your roof was designed for? How do you convert the reported snow depth into a weight?

For that, you need one more piece of information: snow density.

Fresh snow is typically only about 5% to 20% the density of water. That means if you were to let your milk crate fill up with fresh snow, it would only weigh about 3 lb to 13 lb!

Once you have the density and depth of the snow, you can figure out how much it actually weighs in psf. Measuring depth is easy, and density is just mass divided by volume. The simplest way to get those parameters is go scoop up a known quantity of snow and weigh it. However, the keys to an accurate measurement include 1) making sure you don’t artificially compact the snow and 2) getting a full depth sample since, since density will vary over depth. Ideally, you want an undisturbed representative sample.

Snow overload on roofs can be a concern, especially for metal building roofs or roofs with multiple layers of snow. Wallace wanted an easy way for clients to measure the weight of snow on their roofs so they could know when their roof was in trouble. Wallace Principals Tom Wallace, PE and Carrie Johnson, PE researched various options and then with the help of Sam Ray, PE, created a snow load tube – a PVC pipe that can capture a cylindrical core of snow for measuring depth and density without damaging the roof. The snow load tube procedure and calculations are demonstrated in the diagram below. 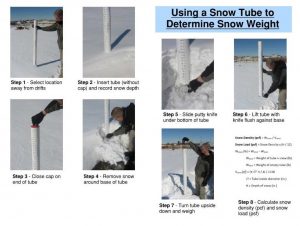 Next time you hear snowfall totals on the news, you’ll know you’re only getting part of the story. Snow density is a key component to understanding actual snow weight – and when a roof may have too much.