Who We Are and What We Do: Structural Engineering

If you’re familiar with the TV show “How I Met Your Mother,” you might remember the episode “Mosbius Designs” (S4E20), where Ted Mosby, Architect (*wink*), starts his own firm. At the end of the episode, Ted reveals his apprehensions about striking out on his own, telling Robin the story of an architect who designs a library, only to find that it slowly sinks because he forgot to account for the weight of the books.

Well, Ted, I’ve got news for you. Accounting for the weight of the books isn’t the architect’s responsibility – it’s the structural engineer’s (150 psf live load for stack rooms per the 2018 International Building Code, in case you’re wondering). And if that were to actually happen and go to court, it would ultimately be a case of negligence against the structural engineer, not the architect.

In the words of Marshall “Judge Fudge” Eriksen:

If Architecture, Engineering, and Construction (AEC) team members were a family, then the structural engineer would be the logical, not-so-glamorous, often-overlooked middle child. While the architect gets attention for creating eye-catching building aesthetics and the contractor is known for making the designs come to life, few think about who is making sure the design will stand up.

“They absolutely never get it,” said Wallace’s Skylar Calhoun, EI, when asked what people say when he tells them he’s a structural engineer. “ ‘What is that?’ ‘What do you do?’ Or they think I’m an architect and just work on the design and look of [buildings].”

“Pretty much anyone who is not familiar with the industry thinks I’m an architect or contractor,” said Epp. “And they always think I work in residential. They only think of buildings as far as houses go and forget there’s retail, commercial and all of these other buildings that are actually more of what we do.”

At the end of the day, most structural engineers don’t solely design residential houses. It’s also not their job to make buildings look pretty, nor do they physically construct them.

On the most basic level, a structural engineer’s job is to look out for the health, safety, and welfare of the public by applying engineering principles to ensure structures are adequately designed to resist expected loads.

For a traditional project, a structural engineer goes through the following basic procedure: 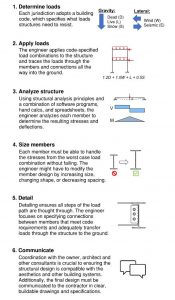 During their time at Wallace, Epp and Calhoun have worked on a wide range of structural projects, which has made them realize that even they had misconceptions about what structural engineering can encompass.

“Honestly, I thought that every project would be a ground-up project, where you take it from concept all the way to construction,” said Epp, noting that she currently does a lot of small projects analyzing existing buildings that are being modified.

Epp also has helped out with projects for Zahner, a company who creates specialized architectural metalwork for art or building facades. Supports and connections for fancy facades need to be designed to resist loads too, something most people – even engineers – might not think about.

Calhoun has worked on some more traditional design projects, but even those haven’t been typical run-of-the-mill buildings. He’s been involved in designing and detailing storm shelters, which require high design loads and special details. He has also had the opportunity to perform special inspections and structural observations for these and other structures, ensuring they are constructed as designed. Calhoun is on his way to becoming a Master Special Inspector who can provide quality assurance for reinforced concrete, steel welding and bolting, masonry, and more.

There’s more to buildings than just iconic lionhead stonework. Although structural engineers’ contributions might sometimes be overlooked, their services – from designing new buildings to analyzing existing to helping contractors ensure buildings are constructed correctly – are vitally important to everyday safety.