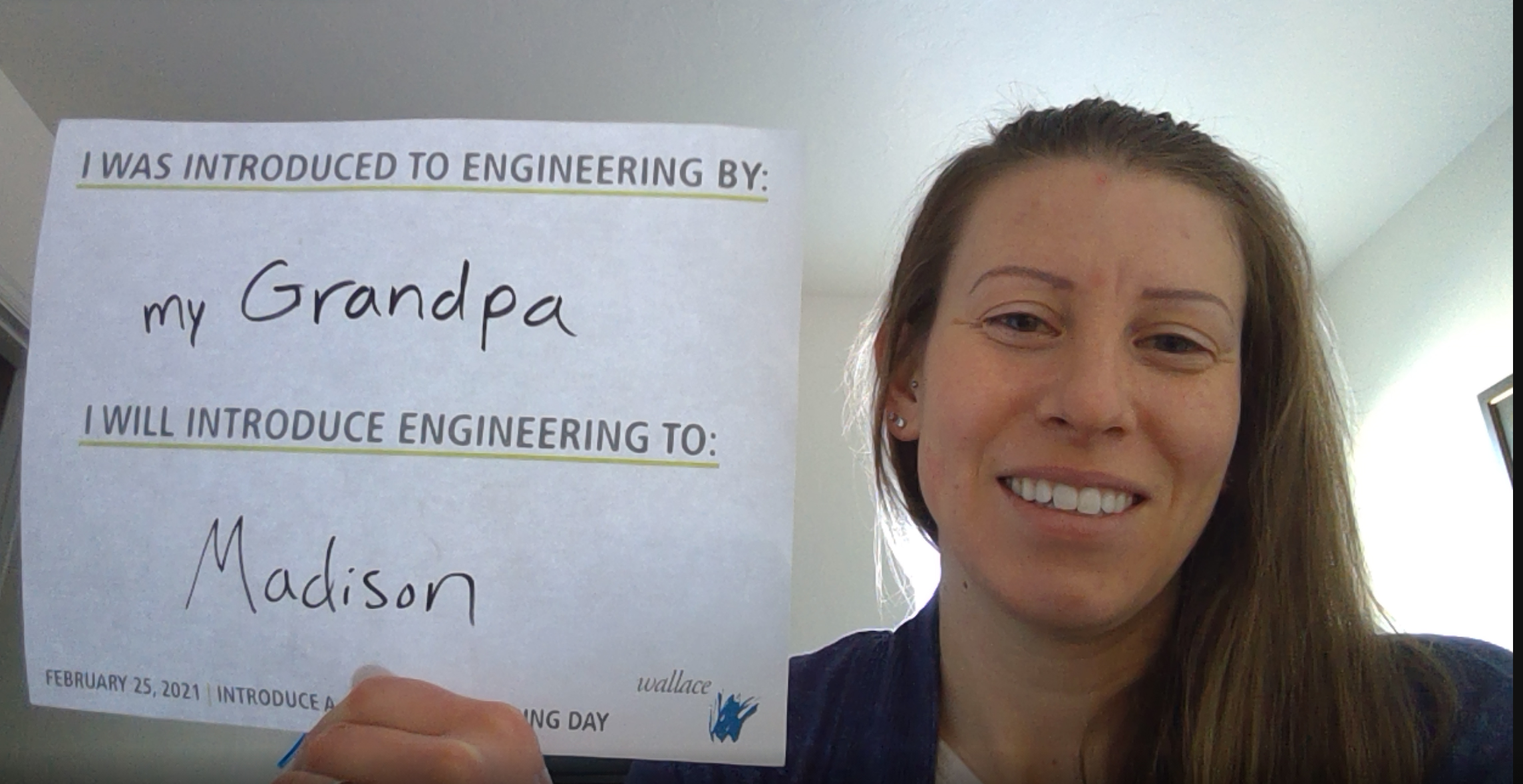 You Can’t Be What You Can’t See: Unlocking Hidden Potential in the Next Generation of STEAM Professionals

On an average day at Stanford University in the late 1970s, Sally Ride, then a PhD student in physics, was paging through the university newspaper when an ad caught her eye. NASA was looking for astronaut candidates.

The rest is history.

Everyone has a story. A series of events and people influence your life and shape you into the person you are. One single event or one single person can alter that trajectory. Just one.

In honor of Engineers Week and Introduce a Girl to Engineering Day on February 25th, we asked the women of Wallace to share their stories of that moment or interaction that defined the course of their career.

Mili Angier developed an interest in engineering after completing a roller coaster project in her AP Physics class. Angier remembers her teacher, Mrs. Blackwood, making physics enjoyable, believing in and encouraging her, and ultimately being her inspiration to pursue engineering.

Kasha Egan was officially introduced to engineering by her 7th-grade shop teacher Mr. Hoffman. She excelled at drafting and hands-on projects, such as constructing and testing a bridge made out of straws, earning the highest scores in the class.

Lindsey Johnson’s dad was a math teacher and always believed she was destined to be involved in engineering. Her junior year in high school, she took an “Introduction to Engineering” class at the local VoTech and fell in love.

McKinley Guenzel credits her high school chemistry and calculus teachers for believing in her and showing her that with enough hard work, she could learn subjects that she previously thought she wasn’t smart enough to learn. Then, her freshman year engineering teacher sparked her interest in civil engineering, leading her to a path she hadn’t considered.

“Growing up, I was never interested in construction or concrete, but he had such passion and excitement for all things engineering that I was able to narrow in and learn to love civil engineering.”

All these Wallace women have one thing in common: someone introduced them to engineering or showed them they belonged in this field.

When Sally Ride became the first American female in space, all she knew was that she was following her dreams and passion for science and physics. However, after returning from her first Challenger mission in 1983, she realized her drive and accomplishments were almost as far reaching as the cosmos. She was suddenly an influencer for girls in science everywhere.

During an interview in 2012, Ride discussed how she ended up embracing her position as a role model who made girls realize the sky is the limit.

“Young girls need to see role models in whatever careers they may choose, just so they can picture themselves doing those jobs someday. You can’t be what you can’t see.”

“You can’t be what you can’t see” has become the motto for introducing minorities to Science, Technology, Engineering, Arts, and Math (STEAM) fields. Women and minorities remain highly underrepresented in STEAM fields, and the idea is to encourage more minority participation by showing kids STEAM professionals who are like them.

For many kids, identifying with professionals that share their gender or skin color or life experiences can be a powerful, eye-opening motivator. Additionally, as our Wallace women’s stories show, you never know who will be a role model or spark an interest.

On a broad level, “You can’t be what you can’t see” represents how strong role models can help unlock hidden STEAM potentials of young minds. Read on for three ways you can help kids see what they can be:

1. Open their minds to STEAM possibilities.

You can’t be what you don’t know exists.

“No one introduced me to engineering. When I went to college I didn’t even know engineering existed,” says Butcher.

Growing up, Butcher could usually be found on her family’s farm helping out with hands-on maintenance tasks. When she went to college, she didn’t realize that she could have a professional career in the building and construction industry, so she bounced around from history to computer science before stumbling across Architectural Engineering in her course catalog during her third year. She jumped on this opportunity to change majors again and has never regretted it.

Doing something as simple as opening up kids’ minds to opportunities in STEAM that align with their interests could be life changing.

So your niece loves makeup? Tell her about how her makeup and beauty products are developed and tested by chemical engineers!

Does your son dig gardening? Ask him if he’s ever heard of bioswales or rain gardens and explain how civil and environmental engineers can design these to handle storm water runoff!

Are your friend’s kids gamers? Let them know that there are computer scientists out there who write programs and code for their games!

Show kids how STEAM fields impact their everyday lives in ways they never thought about. It could be the spark they need to realize what opportunities are out there for them.

2. Encourage them to identify with excellence.

STEAM professions aren’t just looking to fill a quota. They’re looking to attract and retain the next generation of top notch engineers and scientists who show a willingness to learn and grow and want to be the best they can be.

Highlight the excellence, passion, and hard work that defines the engineers and scientists of all genders and races that the STEAM industry needs.

3. Believe in them and inspire confidence.

Guenzel correlates the confidence she gained on cross country courses and black diamond ski slopes to the self-assurance that made her believe she could conquer engineering too.

“I think introducing young women to multiple areas of life that might push or challenge them and being there to support them will be the best way to introduce them to engineering eventually,” says Guenzel.

Building confidence in kids – in this case, especially girls – shows them they can dream big and can belong in whatever field they choose.

Egan has fond memories of helping her dad with his carpentry projects. Whether he was remodeling the house or building an outdoor deck and 30 person Tiki bar, she was always her dad’s helper – not her brother.

“I never once thought these weren’t activities for a girl. Looking back, my father never let that notion cross my mind, and I don’t think he ever had those thoughts either.”

Butcher, Johnson, and Angier have all fostered confidence in the young girls in their lives by sharing their passions through hands-on projects. Butcher taught her daughter to use power tools, and Johnson and Angier have shared GoldieBlox and Inventor Girl kits with their kids and friends’ kids.

Cultivate confidence in all areas of kids’ lives. Their successes and your affirmations can show them they belong in whatever interests them.

Whether you know it or not, you’re a role model who could be that individual who inspires a young person to join the next generation of STEAM professionals.

Learn about how one local organization is bringing STEAM to kids across Oklahoma!

All Aboard The STEAM Engine: Inspiring Oklahoma’s Next Generation of STEM Professionals