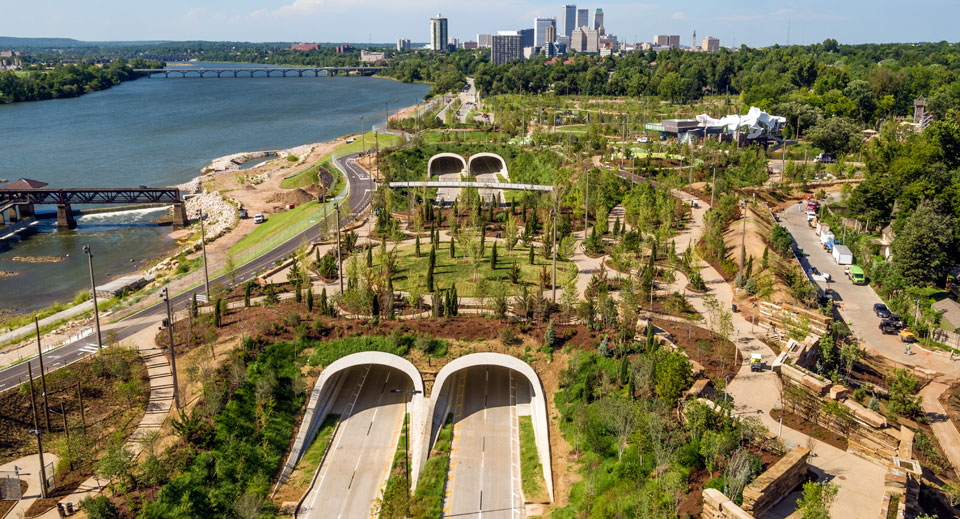 The Gathering Place: More than Meets the Eye

There’s more to Tulsa than meets the eye.

Head a few minutes south of downtown on Riverside Drive and you’ll quickly have your curiosity piqued as you cruise through the sleek concrete tunnels of two lush land bridges that blend seamlessly into the surroundings. Just to the east, hidden by hills and thousands of trees, lies a dreamland oasis of eye-popping wonders.

Majestic, castle-like towers rising several stories above the landscape are the focal point of a series of playgrounds that have something for everyone. From daring rope bridges and high speed slides to the whimsical, larger-than-life tulips and Blue Heron play sculptures, almost every structure begs to be climbed and explored.

When you’re ready to cool off, just beyond the playgrounds, you can run through the playful water jets and water walls of Mist Mountain or explore the interactive water widgets at the streams flowing through Water Mountain plaza.

While exploring, it’s hard not to notice the iconic sail-like roof structure of the ONEOK Boathouse. Its third floor pavilion offers superb views of the playground and overlooks Peggy’s Pond, where adventurers can kayak or paddleboard and families can picnic along the west shore beach.

You could spend hours meandering through the paths of this 66-acre playground and garden wonderland and still not discover all this park has to offer. Each turn offers nooks and crannies full of swings and slides, skate parks and sport courts, or just quiet places to sit and enjoy a beautiful day.

Amazingly, even if you explored until you thought you had seen it all, there’s still more to the Gathering Place than meets the eye. And in this case, it’s because of aspects you physically can’t see.

The Gathering Place was essentially created out of nothing. It’s hard to remember what this stretch of land looked like before it became the vibrant heart and soul of Tulsa, but that’s because it was unremarkable. Most of the land was an open field overlooking the river – a blank canvas waiting to accept whatever could be dreamed up. And the Gathering Place is the epitome of a vivid dream come to life.

While the stunning visuals of the land bridges, Chapman Adventure Playground, ONEOK Boathouse, and Williams Lodge will always define the the Gathering Place, what you see on the surface is only a small piece of what has gone into making the park the gem it has become. The park is built around a host of intriguing design and construction facets that aren’t visible to the trained eye, yet vitally important to the success of this park.

Wallace Engineering is proud to have been a part of the outstanding team of design and construction firms who worked together to create everything from the eye-catching attractions to the behind-the-scenes necessities.

Here are a few ways Wallace impacted the design and construction of the Gathering Place in ways you might not realize:

Playground Complex
Although the actual play structures and sculptures were designed by German firm Richter Spielgeräte GmbH, Wallace enjoyed the challenge of designing foundations for all of the unique playground equipment. When you consider how the one of a kind sculptures with offset centers of gravity must support adventurous kids climbing from all angles, or how the tall towers must withstand Oklahoma winds, it’s clear that foundations – though unseen and taken for granted – are crucial parts of the overall structures. 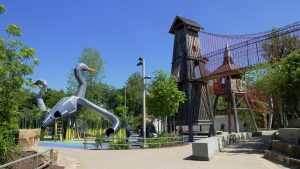 Peggy’s Pond
While you can probably guess that Peggy’s Pond is a newcomer to the landscape, you might not be familiar with the special construction techniques used to create it.

In order to form this body of water, Wallace designed a series of below grade “cut-off” walls set inland from the shoreline perimeter. The cut-off walls extend below the groundwater table and help control the effects of groundwater fluctuations on the pond’s water level.

Most cut-off walls were designed and constructed using a “slurry wall” technique, where a deep wall trench is excavated and filled with bentonite slurry to keep it from collapsing during excavation. Then, the slurry is displaced with concrete from the bottom up, creating an unreinforced concrete wall. Some cut off walls also had to act as retaining walls for soil. These were designed as secant pile walls, which involved drilling alternating reinforced and unreinforced overlapping concrete piers seated in bedrock.

These slurry and secant pile subterranean walls will never be seen, but their design and construction were key to the creation and long term performance of this recreational pond. 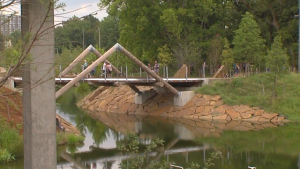 Mist Mountain
Most park goers will rarely give a second thought to what goes into the behind-the-scenes operation of this attraction’s captivating waterfalls and interactive fountain jets. However, underneath Mist Mountain is a subterranean vault designed by Wallace that houses the pumps and equipment for these water features. Additionally, Wallace designed the Koi ponds and other above ground structures at Mist Mountain. 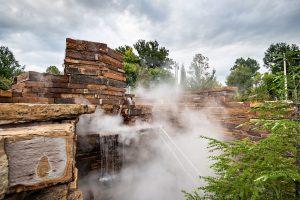 Four Seasons Garden
The Four Seasons Garden is defined by its maze of pillars and walls constructed from Oklahoma Bluestone. Wallace completed the fun and challenging design of these iconic cantilevered elements and their foundations.

Maintenance Facility
A park this big and complex requires its own staff and a hefty fleet of maintenance equipment, but if you’re looking for an out-of-place, boring building where they store all their gear, you won’t find it. That’s because the maintenance facility is underground…up to 12 feet underground, to be exact.

Wallace designed and inspected the construction of the 30,000 sf underground structure that houses the park’s maintenance equipment and offices. The twelve feet of soil above the structure’s roof equates to almost 1,500 pounds per square foot of pressure – and that’s not even including loads from cars, people, or above ground structures. Needless to say, it is quite an engineering feat that you won’t know is there unless you’re looking for it.

Next time you’re at the Gathering Place, you can truly appreciate all the work that has gone into what meets the eye, including work performed by Wallace.

“There is literally no part of the park that we didn’t touch in ways large and small,” said Brian Walker, PE, Principal in Charge of a large portion of Wallace’s structural design contributions. “It was cool to be involved with a project that has become a regional attraction and that has drawn attention from around the world.” 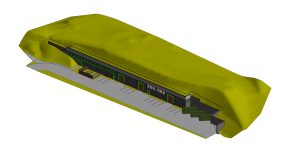 Interested in more design and construction facts about the Gathering Place? Read this article about the ENR Regional 2019 Project of the Year.